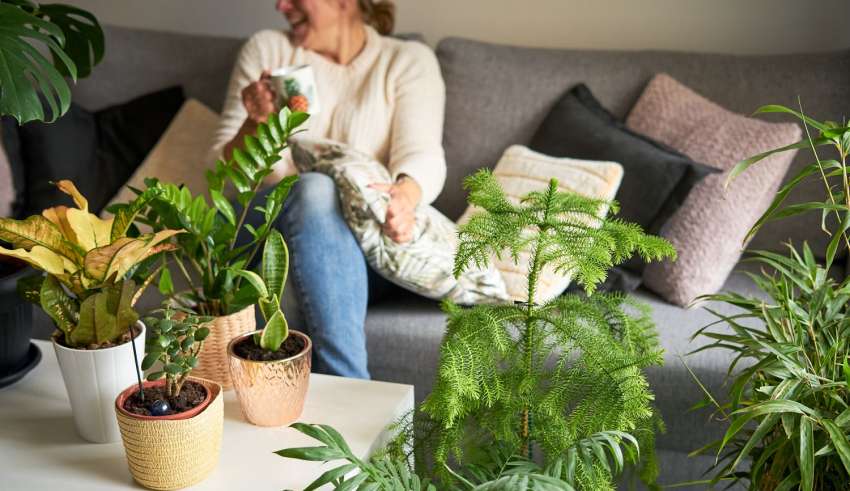 Indoor gardening is still experiencing a resurgence in popularity, thanks to Instagram’s greenery-inspired interior designs, plant-based podcasts, and online plant subscription services like Lazy Flora and Grounded, among other factors.

While social media trends are renowned for having short flourish-and-fade lifecycles, indoor gardening may have a longer life than most because of the several ways houseplants boost health and well-being, according to the National Gardening Association.

Learn more about How to Plant Peas? Complete Guide

Here’s what the study says about the advantages of living and working in an environment with indoor plants.

7 Advantages of Having Indoor Plants

Many individuals love living and working in landscaped green spaces, and the majority of them appreciate having attractive flora in their surroundings. Is there anything else to it? Here are seven advantages that indoor plants, according to science, may bring.

According to a study

Researchers from the Journal of Physiological Anthropology discovered that having plants in your home or office can help you feel more comfortable, relaxed, and connected to the world around you.

A short computer-based task or repotting a houseplant were the two tasks assigned to participants in the study. Participants could choose between the two tasks. Biological markers related to stress, such as heart rate and blood pressure, were monitored after each task was completed by the researchers.

Participants’ stress responses were observed to be reduced as a result of the indoor gardening exercise, the researchers discovered. A rise in heart rate and blood pressure was observed throughout the computer task, despite the fact that all of the study participants were young men who had grown up with computers in their homes and offices.

The researchers came to the conclusion that working with plants could help to reduce both physiological and psychological stress levels.

Students who studied in the presence of real, living plants in the classroom were found to be more alert and better able to concentrate than students in the other groups, according to the brain scans of the participants.

Working with plants can be therapeutic in some cases.

The practice of indoor gardening can be beneficial for persons who are experiencing the symptoms of a mental disorder.

Horticultural therapy has been shown to improve feelings of well-being in patients suffering from depression, anxiety, dementia, and other disorders, according to researchers

Plants are being “prescribed” to patients suffering from depression or anxiety symptoms in Manchester, England medical clinics. Although horticultural therapy has been practiced for millennia, it has recently gained popularity in the modern world.

Being able to take in the sights and smells of plants and flowers may help you heal faster from an illness, injury, or surgery.

How to Plant Onion Sets?  Step by Step Guide

It is vital to emphasize that the majority of the study is conducted in medical settings rather than at home and that plants and natural landscapes are the primary focus.

One of your bromeliads might turn out to be the best cubicle mate you’ve ever had.

Plants in the workplace have been shown to improve both productivity and creativity, according to numerous studies. According to one well-regarded study conducted in 1996, students in a college computer lab worked 12 percent quicker and were less anxious when plants were strategically placed near their workstations.

In a 2004 study conducted by Trusted Source, researchers pushed participants to make imaginative links between words. When there was a plant in the room with them, they did significantly better.

Furthermore, according to a 2007 study, those who had more plants in their workspace took fewer sick days and were more effective at their jobs overall.

A view of the city park may increase job satisfaction for anyone, but it may come as a surprise to hear that a potted plant might have a comparable effect.

In total, nearly 440 Amazon employees in India and the United States were interviewed by researchers from Trusted Source They discovered that those who worked in an office setting that featured natural components such as indoor plants reported higher levels of job satisfaction and more loyalty to the business than those who did not work in an environment that included natural elements.

The natural ingredients, according to the researchers, served to buffer the impacts of occupational stress and anxiety.

The NASA study undertaken in the 1980s, which established scientific backing for phytoremediation (which is the term for plants that remove pollutants from the air), is often cited as a starting point.

Researchers were investigating ways to improve the air quality in a sealed spacecraft at the time, and they came to the conclusion that the roots and soil of houseplants dramatically reduced the amount of airborne volatile organic compounds (VOCs) in the atmosphere.

Since those early studies, several studies have been conducted, and both confirmation and disconfirming findings have been made.

In recent research, it has been discovered that to achieve the air purifying efficiency of modern biofilters and other technologies, you would need to house a significant number of plants.

In the event that you decide to purchase houseplants to naturally refresh the air in your home, here are a few of the species that have been proven. Palm trees such as the areca, lady, dwarf date, and bamboo palms. Boston fern, rubber tree, and spider plant are examples of such plants. It is a ficus tree. Indoor plant kinds that are safe for pets and children should be chosen.

When to plant grass seed in spring? Easy Guide to Learn

Due to the fact that some plants have portions that are dangerous and other sections that are entirely safe, it is practically impossible to compile a comprehensive list of toxic plants.

It’s important to consult a credible source before bringing a new plant into your home where children or pets could be able to get their hands on it. Local extension services and poison control offices may issue a list of dangerous plants in your area, which you can consult for more information.

The American Society for the Prevention of Cruelty to Animals and the National Poison Control Center both provide resources.

PETS AND CHILDREN MAY BE AT RISK FROM SOME PLANT PRODUCTS.

These are some examples of common plants that can be harmful to children and animals, in no particular order:

English ivy jade is a type of jade that is found in England.

jonquils and lilies in a variety of colors

pothos \ssago Umbrella palm is a type of plant.

This is by no means an exhaustive list. Especially if you have children or pets, you should double-check before introducing a new plant type into your home.

Having plants in your house or office (or in your home office) has a number of advantages, but there are also some risks associated with doing so. Keep these considerations in mind as you consider whether or not to create an indoor garden.

Keep an eye out for signs of pest infestation.

Insects, molds, and other pests can utilize houseplants as a Trojan horse to infiltrate your home. You should avoid repotting plants with dirt from your garden since it will cause them to get diseased.

Check the leaves for symptoms of pest infestation (eggs, webbing, holes) so that you can stop an infestation in its tracks.

Is it possible for houseplants to cause allergies or asthma?

This is a topic that has generated some discussion. The fact that the majority of common houseplants do not produce much pollen may provide some relief to those who suffer from allergies or asthma symptoms that are aggravated by pollen.

Some cut flowers, such as daffodils, have the ability to release pollen, however, asthma specialists at Trusted Source have found no evidence to suggest that indoor plants themselves are a cause of asthma episodes.

If you have symptoms that are caused by dampness, mold, or fungi, you may need to pay close attention to the moisture levels in the soil in your plant containers.

Researchers at Trusted Source have discovered that indoor exposure to mold, moisture, and fungi can exacerbate asthma symptoms, particularly in youngsters.

You should consider removing plants from your home immediately if you begin experiencing asthma symptoms after bringing them in. This will allow you to speak with a medical professional about your symptoms.

The bottom line is as follows:

The presence of plants in your house or business might be a source of enjoyment for you. Indoor gardening reduces stress, increases creativity, productivity, and concentration, and aids in the recovery process. Several studies have found that indoor plants are beneficial to the air quality in a home’s indoor environment.

If you have children or pets in the house, it is critical that you are aware of which plants are harmful. If you suffer from asthma or allergies, you should be on the lookout for species that worsen your symptoms. It is possible to make your home or workplace a happier and healthier place to be by incorporating living, “breathing” plant life into your environment.