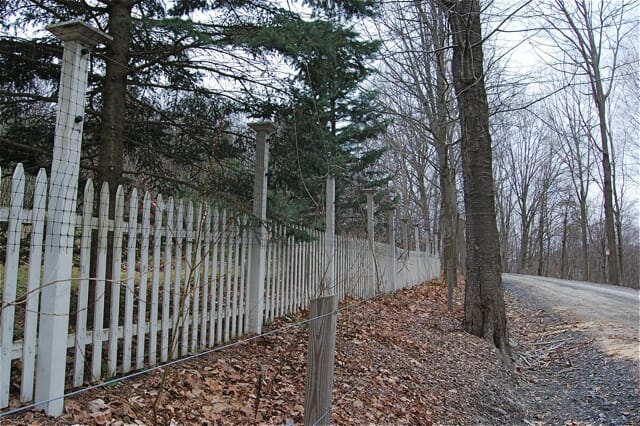 I gardened with the deer for nearly a decade, until I reached my breaking point. I tried everything to keep them away from my plants- spraying, sachet-ing, blood-mealing, and Milorganite-ing – but they always found a way in. They were indiscriminate feeders who didn’t care if they ate everything in sight; as long as there was food available, they would continue eating. So finally I decided to build a fence.

If you’re looking for a fool-proof method to keep deer out of your garden, look no further than fencing. Deer fencing is the only real deer-proofing method there is (assuming your fence is the right construction for your location and animal population, and is well-maintained).

The term “deerproof” is quite deceiving, as I have found that deer will nibble on anything they can get their mouths on. Not to mention, the design limitations such lists put in place are insanely restrictive for plant-lovers like me. We’re practically the same, deer and I– we just can’t share a space together without incident.

The woody plants in the garden were being disfigured. The damage wasn’t just an occasional hosta stripped of its leaves (above); it was also uglier, and it sent up new growth relatively slowly. I’d invested money and then time in these woody plants (waiting for them to go from $30 youngsters to a real part of the landscape), but the deer damage was mounting fast. Some viburnums, in particular, had taken multiple hits and were beyond corrective-pruning rehab; likewise with many evergreen hollies—two of my favorite genera of shrubs.

Not only were the products pricey, but they also took a lot of time to use and weren’t always effective.

One day, as I looked out the window of my house, it suddenly struck me: I garden to enjoy the scenery I have created–not to behold a collection of fragile plants each confined in their own separate cages like an army barracks filled with randomly placed tents and tee-pees during wartime. It was a depressing sight. That was enough for me.

My first action was to explore and research by talking to scientists and agricultural experts (not garden-product marketers), which is always my preferred first step. To pick a style of fence that will work with your garden’s location, you need information about the local deer population, their habits, and what they’re capable of jumping over or crawling under (aka how high can they jump, and how low will they go).

Managing deer resistance in a suburban environment can present many challenges that those living in rural areas may not face, such as hilly terrain. In order to comprehensively understand how to protect your landscaping, I suggest reading “Deer-Resistant Landscaping” by Neil Soderstrom (Amazon affiliate link). This book will offer suggested plants that have been known to resist deer, 20 other animal pests, and fencing alternatives. From personal experience, I wish this title existed when I was first starting out on my journey of creating a resistant landscape.

Location-specific insights can be easily found online through your cooperative extension, a botanical garden, or other agricultural organizations. I personally used the research available from Cary Institute of Ecocsystems Studies when I was starting out. These options are product-agnostic and provide great insight for anyone looking to start their own business.

To protect your plants from deer, start with this primer from Ohio State’s wildlife program specialist Marne Titchenell. I quickly learned from my research that there are several types and levels of fences:

I also learned a few more things, some of them from trial and error:

I learned from salvia expert Betsy Clebsch that two rows of low fencing situated parallel to each other will also work effectively. This means having two 4-foot tall fences spaced 5 feet apart.

The gap between the fence is too wide for any jumping (and deer hate entering an enclosed space, as it gives the impression they might get trapped). But this width is perfectfor your wheelbarrow and lawn mower– or you could choose to plant a garden inbetween the spaces.

This is a perfect solution for small gardens or areas near the house where having a tall fence would look bad. In essence, it acts like an old-fashioned dooryard garden, but with two rows of fencing. A more makeshift double-fence application could be made by using moveable electric fencing panels, such as those sold to contain sheep. One warning: If you have lots of deer in the area, put low fences up immediately and all at once. Don’t let the animals get used to seeing some here and there–change their pattern of movement only once so that it sticks.

If you’re willing to put in some extra effort, Michael Dodge says planting a living deer-proof fence or wide hedge from willows is an option. His top pick for the best deer-resistant Salix species of willow for fencing and hedging (a.k.a fedges) are purpurea willows because they’re not tasty to deer . Another great possibility he suggests is gracilis or nana– these varieties grow densely and reach about 4 x 4 feet, making them too difficult for animals to jump over.

My own Fencing Adventures

MY PROPERTY borders state parkland and forest on three sides, so I decided to use the natural treeline as part of my fence. This both camouflages and supports my barrier, which is why I chose a high mesh fence.

On the top boundary in the first photo, I did not want a caged look from having a very tall fence, so instead I made a modified double fence. I placed 6-foot posts between sections of picket fencing , and then tied poly mesh reinforce with high-tensile wire on top (but it’s not electrified). There is also an “outer”fence that consists of three strands of trip wire stretched on low posts outside of that layer .

I have had two phases in my fence journey: First, after researching online, I decided to use polypropylene mesh. After six years, I realized that this material wasn’t holding up as well as anticipated because animals and tree limbs would constantly break it.

I neglected to support the mesh by running several high-tensile wires horizontally through the top, bottom, and middle. reinforcement is shown in the photo above (and pinned down at ground level as well to prevent invasions). It’s important to know that this is not bird netting but rather heavy poly with larger openings.

After the poly fencing had done its job, I decided to switch to woven wire, an incredibly heavy 8-foot metal material. Sliding farm gates on rollers cross both my driveways: they may not be pretty, but they’re better than what the deer would do to my garden if left unguarded. Nobody’s been in since; well, nobody except the frogboys, but they don’t eat much in comparison to a full grown deer.

In 2014, an adult black bear climbed my fence to have a hot-tub like dip in my water garden. The usual bobcat and fox visits don’t bother me though.

If you’re bound and determined to go fenceless, do your homework first. For instance, read this interview with the Ohio State specialist on basic deer-fighting tactics. And then research plants that might stand up to the pressure of deer. I find the Rutgers search tool very helpful in determining which plants deer like or don’t like (see sample result below); other university extensions have lists and charts for different regions as well.

You’ve probably heard the old saying “gardening is the best therapy.” An…